Find of the Month: A Fashionable Item

This month, as we refresh our wardrobes for the warmer weather, we discovered a curious fashion item in our Cabinet of Curiosities.

Although this item (which was donated to The Whitaker in 1973 by Mrs Jones) looks like some kind of medieval torture instrument it is in fact a ‘Dorothy’ bustle frame from circa 1870/80, designed to make a woman look more fashionable. 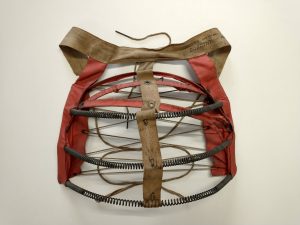 Methods for exaggerating a woman’s posterior have been used at various times in the history of Western fashion (usually by upper-class women) – and are still used today.

In the late 1600s and in the 1700s skirt fabrics were pulled behind into swags, then later in the 18th century these were supported by pads or cork ‘rumps’. By the 1820s such pads became known as ‘bustles’. (1) 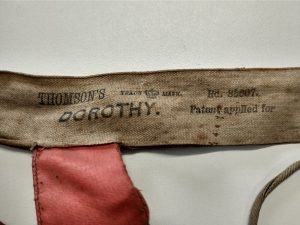 Women’s dresses grew more extravagant up to the 1860s, with extremely wide skirts being worn over crinoline cages. Such crinoline dresses put their wearers at great risk of being blown over by the wind, being caught up in carriage wheels or even catching fire! Perhaps this is why the crinoline went out of fashion.

By the 1870s it was in vogue to have slimmer hips and flatter fronts, but fashionable women continued to use bustles made of horsehair, wool or straw with metal, cane or whalebone hoops to exaggerate their bottoms (2). Imagine how hot it would be trying to dance the polka whilst wearing horsehair padding under your dress! 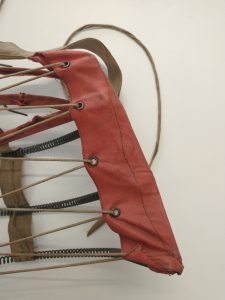 Bustles went out of fashion for a while but returned even bigger, sticking out backwards like a horizontal shelf, by the 1880s. By this time the bustle was usually made from a frame of metal hoops connected by linen straps. They were very bulky to wear (3). Sitting down to drink tea at a friend’s house was a challenge because the bustle wouldn’t allow you to sit back in a chair – you had to sit sideways on the edge of the seat.

It wasn’t long before someone invented a bustle that would allow a woman to sit down with a little more comfort. In the late 1880s, the ‘Langtry Reticulating Bustle’ was designed.

Named after the actress Lille Langtry it was made up of an arrangement of metal bands on a pivot. When sitting down, the metal bands folded up into each other (4). The bustle went back to its original shape when the woman stood up. She could be stylish and also comfortable.

Similar designs appeared in Europe and in Britain, some with metal reticulating hoops and some with springs connected by canvas or linen straps. They were usually tied by straps around the waist or tied to a corset by a belt.

The example of a reticulating bustle frame held in The Whitaker’s collection (the ‘Dorothy’) was probably made in the Thomson’s factory in London. Thomson’s was a highly successful skirt manufacturing business that began in New York, later setting up factories in London, Paris, Brussels and Germany. The company was a progressive supporter of working women. (5)

A bustle similar to our ‘Dorothy’, though without springs, can be seen in the Victoria and Albert Museum collection online, as can examples of other types of bustle. (6)