As in all museums, the objects displayed in the Whitaker’s galleries are a fraction of the total collection…

Look deeper into the stores and you will find all manner of items currently not displayed due to lack of space, condition and a host of other issues. Many have hidden stories and deserve a wider audience, and William Singleton’s box is certainly one.

Following the redevelopment of The Whitaker, staff and volunteers are cataloguing the collections more fully. We knew we had the box, but the list of contents was relatively basic and not fully entered onto the Museum’s database. Sorting this out will allow people to locate items of interest more easily in the future, making the collection more accessible.

The records of old acquisitions can be surprisingly vague: we know these were donated by a local solicitor in 1989 but we know nothing else of the circumstances, so it’s up to the box to speak for itself.

There’s a serious point here: if you do have family heirlooms with an interesting story, write it down and keep them together. Future generations will thank you! In this case it struck me that we don’t know what his friends called him – was he William, Will, Bill, Billy or perhaps some nickname? For the purposes of this blog we’ll call him William.

First impressions of the box are of a disparate mixture of items. Black and white photographs catch the eye, quite a quantity, mainly what previous generations would call ‘snaps’. Among them is a large professional looking photograph of the Queen Mother, around 1940, pictured with a man wearing a naval uniform, who turns out to be a rear admiral.

Surely this is not our man? Sadly, so it proves, but William does have a naval connection of which more later.

Thankfully, some of the photos are labelled, including one of a group of uniformed men which handily identifies William on the back row; relatively tall and with features distinctive enough to pick him out on others in the collection. 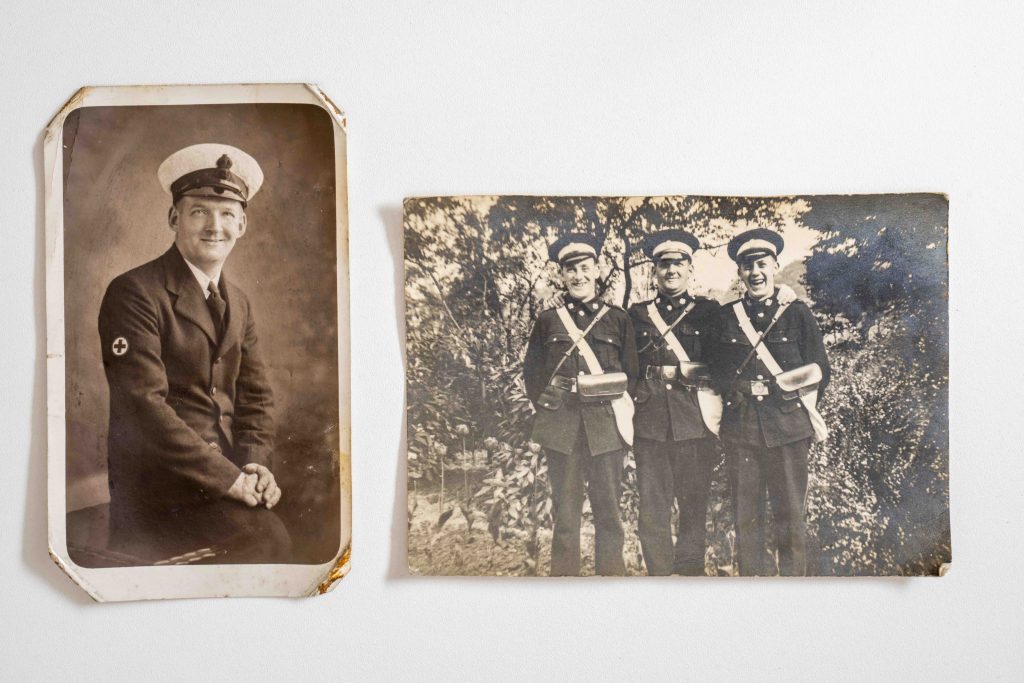 The uniforms are those of the St John Ambulance Brigade and it turns out this was William’s great hobby. He joined the Haslingden A Division as a young man, and amongst the items in the box is a medal with a long chain of bars, one for each year’s service from 1925 to 1938. There are also various books on subjects such as first aid and nursing, plus certificates for courses attended and exams passed. 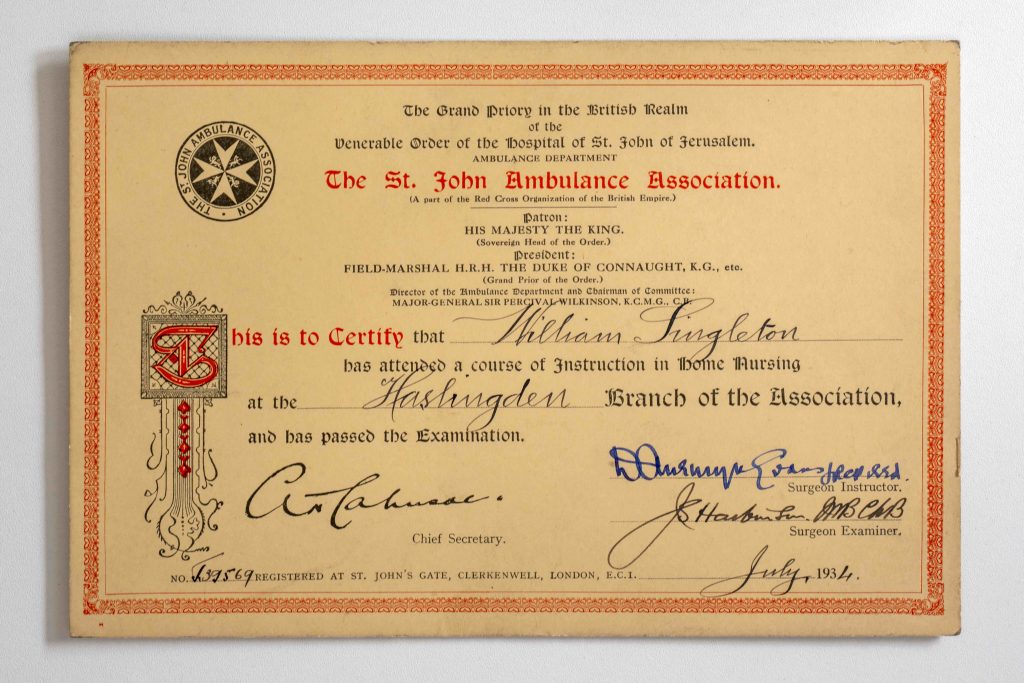 One of his St John Ambulance certificates. 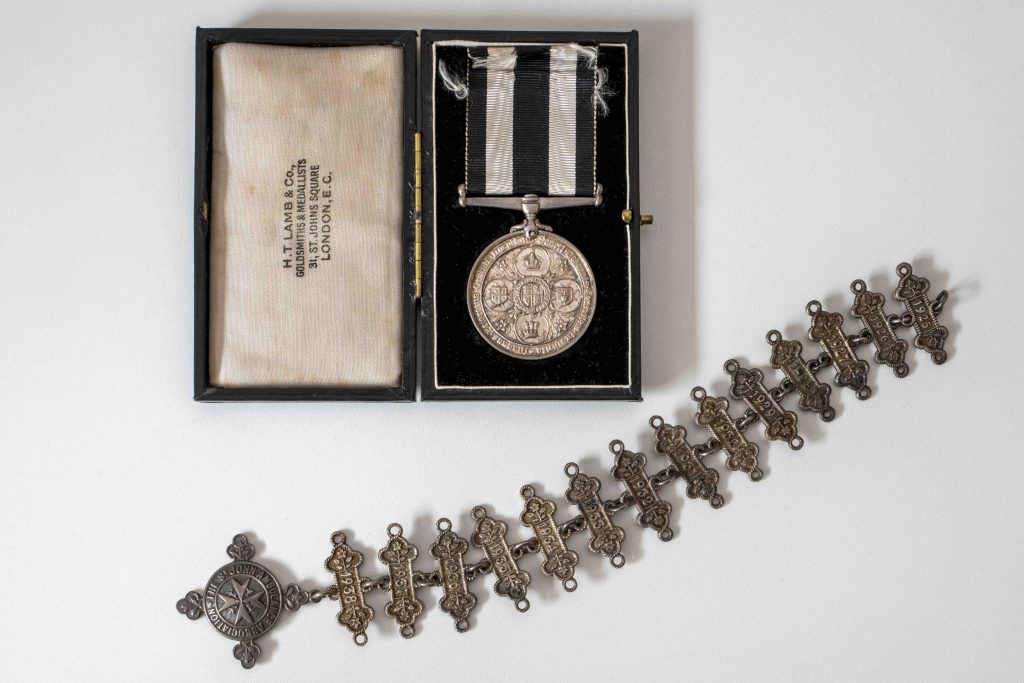 The medal with the long chain would be impractical to wear, so he also had a ‘proper’ ten-year long service medal with an additional five-year bar. One amusing item is a sling, obviously used for training purposes, it is illustrated to show how it might be used, the equivalent of ‘fold here’.

There are also annual certificates, dating from 1936, for courses at Royal Naval hospitals. This struck me as unusual, but the internet came to my rescue, and I learned something new.

From 1903 the navy had recruited from St John Ambulance ranks for what was known as the Royal Naval Auxiliary Service Sick Berth Reserve and this was what William had joined. This force was intended to provide medical attendants for naval vessels and establishments in the event of war, which of course duly came in 1939.

Various Navy documents give more background information about him. Born on March 18th, 1904 in Poulton le Fylde, he seems to have moved to Haslingden at an early age.

In civilian life he worked as a weaver. One photo shows him as part of an informal group, clearly in a mill decorated for some major celebration, possibly the Silver Jubilee of King George V in 1935 or the Coronation of George VI in 1937 (a letter G forms part of the decorations). 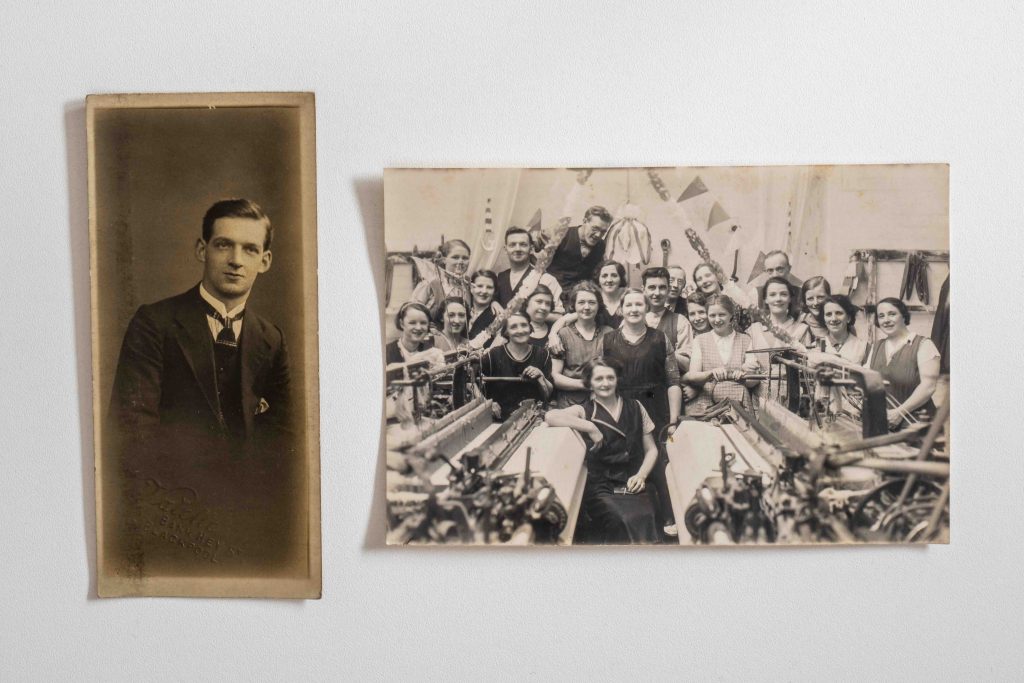 William as a young man, plus with his mill colleagues (back row, second left).

His home address in 1939 is given as 15 Coronation Street, Haslingden, and his sister Ruth Singleton is his next of kin, living at the same house.

His war service record surprisingly mentions no time actually at sea! War was declared on Sunday, September 3rd,1939 when Hitler ignored Chamberlain’s ultimatum to withdraw his troops from Poland. The next day William was at the Naval hospital at Haslar, Portsmouth.

He didn’t stop long. Three weeks later he was on his way to the other end of the UK to RNA Hospital Kingseat at Newmachar, in the countryside ten miles north of Aberdeen. This was to be home for the next couple of years and is probably the setting for many of the photos of doctors, nurses and patients, including William in his medical attendant’s smock.

He had various other postings in the UK including two returns to Haslar in 1942-3 and then in 1944. He also spent some time in 1943 at HMS Gosling, a Fleet Air Arm establishment at Risley, which must have been more convenient for weekend leave.

Finally, after VE Day, he got to go abroad and technically speaking, ‘to sea’. He was posted to HMS Royal Rupert, a former German U-boat tender moored in Wilhelmshaven, Germany, used as staff accommodation for the British Naval Hospital. Unfortunately there is no diary or other record of what he thought of the place, but as a major German naval base it must have been devastated. 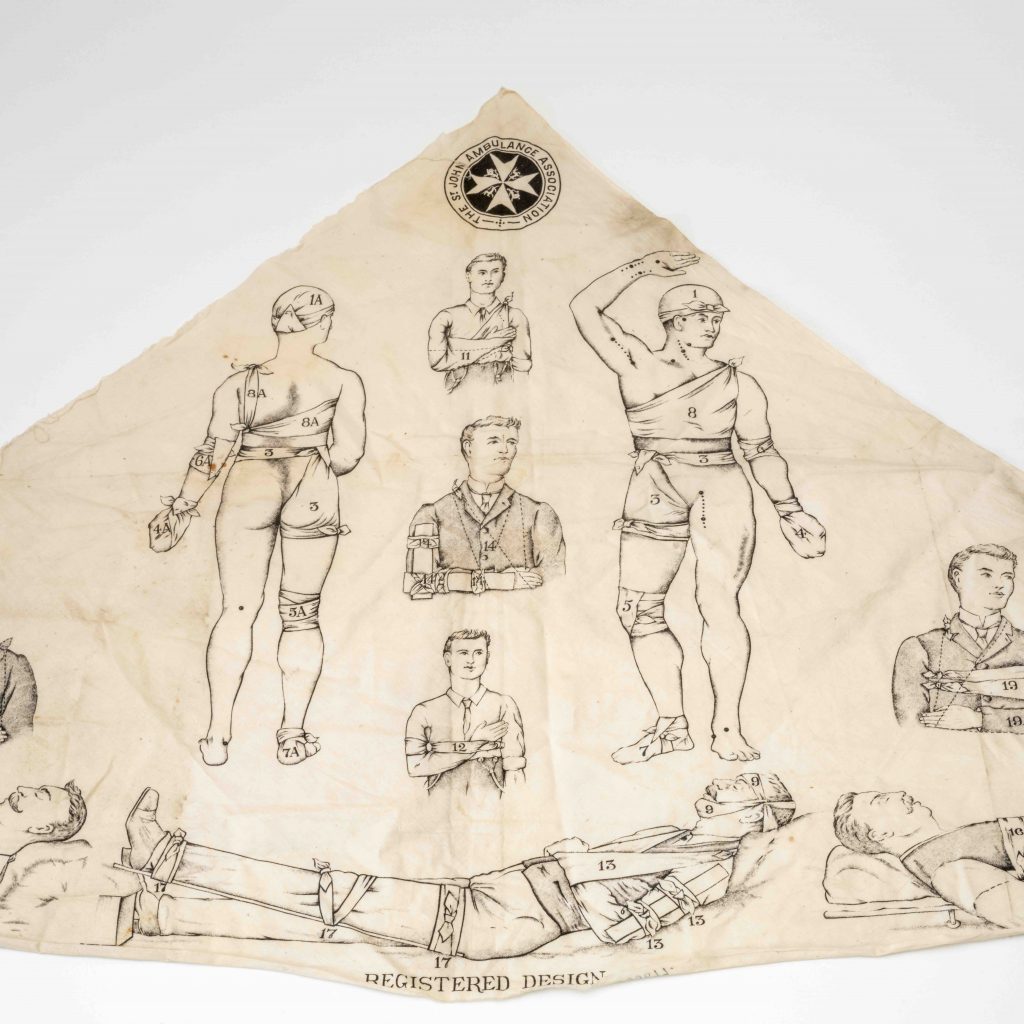 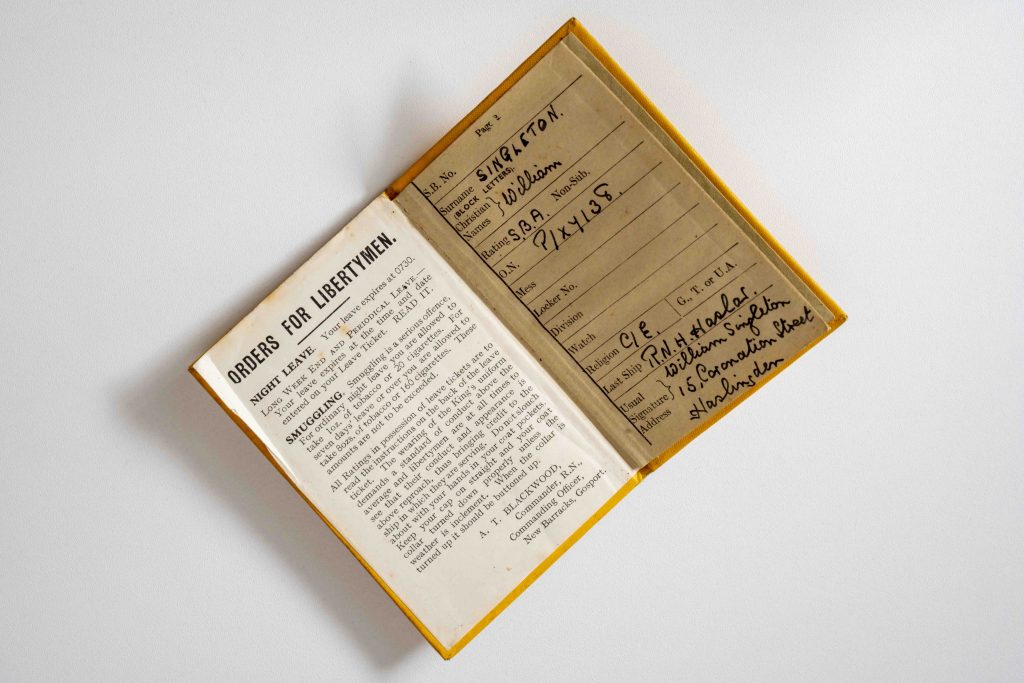 He was released from Naval service in November 1945 and, as far as we know, came back to Haslingden. Presumably he returned to his former life as a weaver but there is no record of this. His military dog tag is in the box, plus naval buttons and some flags. Oddly there are some bars of soap, possibly souvenirs of this period of his life, but I confess to having no useful knowledge of this subject! 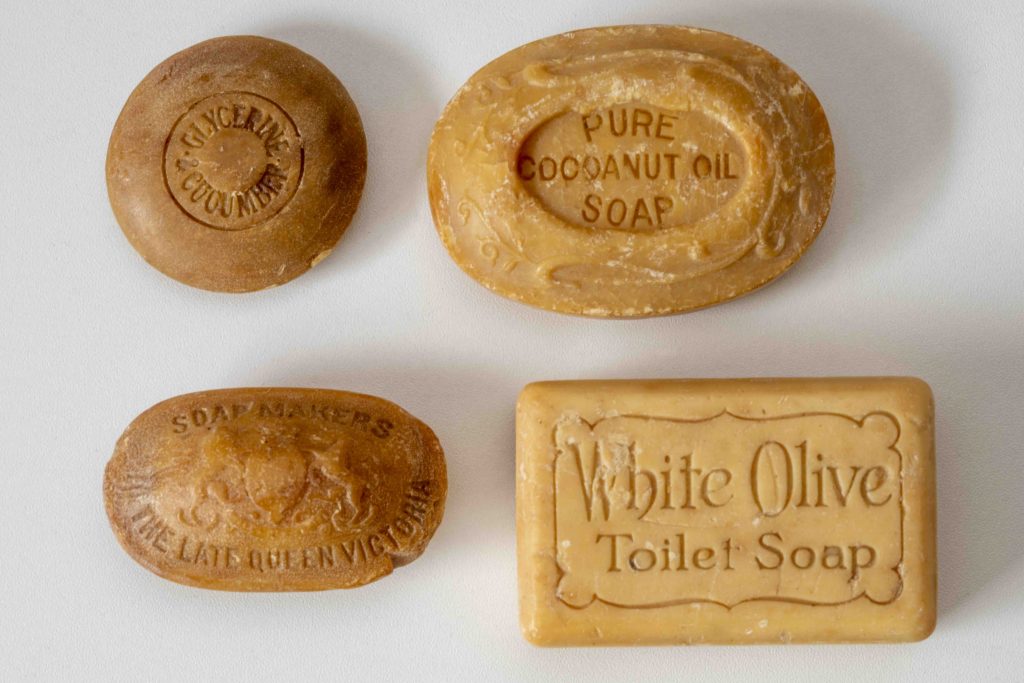 The main item from this period is the Royal Naval Reserve Sick Berth Attendant Long Service and Good Conduct Medal (quite a mouthful). There is a lot of William’s correspondence with officialdom in order to qualify for this, proving his length of service. He was clearly proud of it and kept it in it’s original box and packaging. 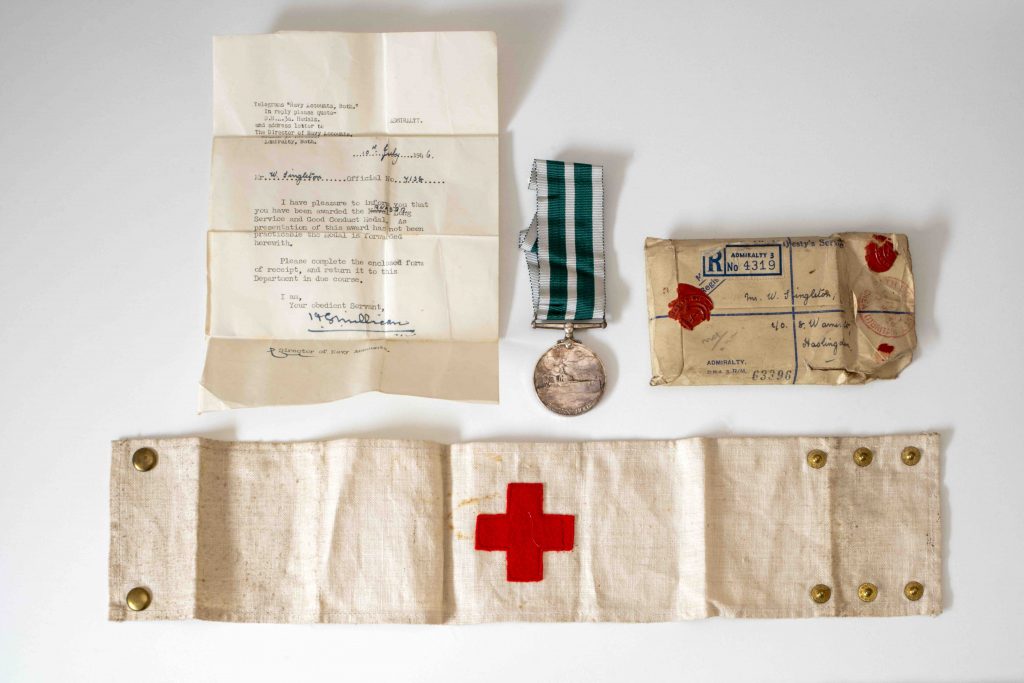 There are a few more apparently unrelated odds and ends, most strikingly an oversize clay pipe depicting the Crystal Palace, possibly a souvenir of a visit there before it burnt down in 1936? We may never know. 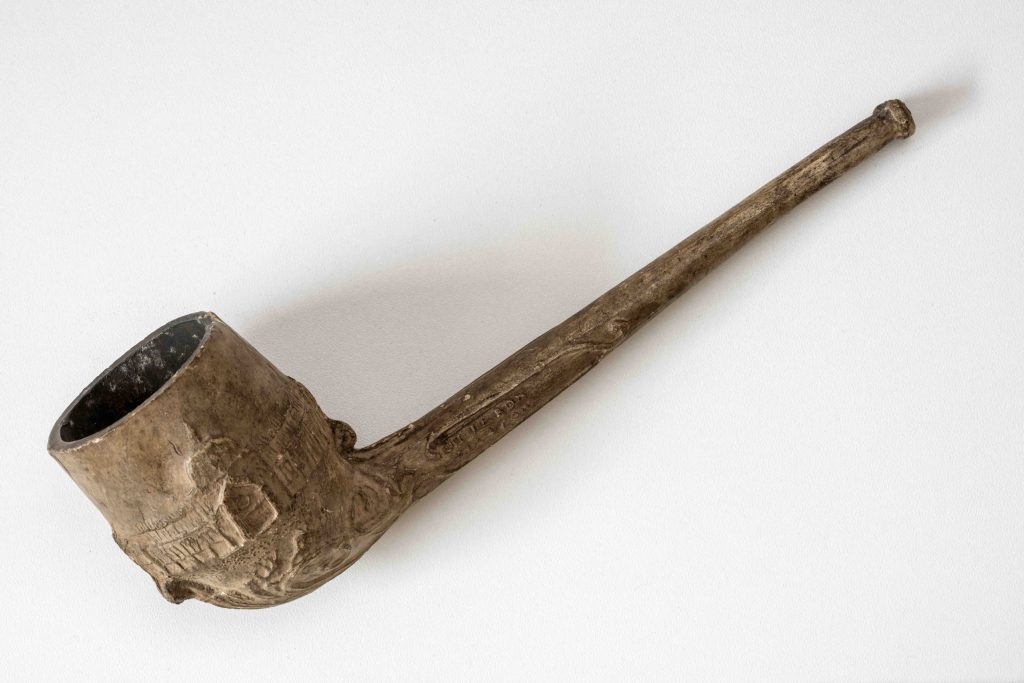 We don’t know what became of William later in life. We presume he stayed in the Haslingden area and died in 1989, when solicitors passed this box of artefacts from William’s life to the Museum. Apart from his sister there is no mention of family, no wife or children.

So, do you have any recollection or knowledge of William Singleton? Perhaps he was a friend, neighbour or colleague? We would love to hear from you, perhaps we could solve some of the mysteries still held in this box.

Find of the Month – May: A Fashionable Item